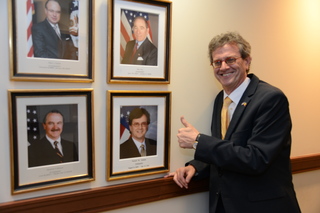 Over the course of four years in Belgium, Ambassador Howard Gutman has over 100 television appearances. His appearances ranged from the daily news shows and weekly political talk shows such as De Zevende Dag (The Seventh Day) to the evening talk and entertainment shows (such as De Laatse Show – The Last Show – and Villa Van Tilt) to sitcoms, quiz shows and specials.  Ambassador Gutman bestowed the last award of the 2012 Belgian Music Industry Awards (the Belgian version of the Grammy Awards) for Song of the Year (during which he voiced support for the anti-piracy guidelines) and a Lifetime Achievement Award on annual Belgian Sports Award program (the Belgian version of the ESPYS).  The popular Belgian comedy show “De Tegen Sterren Op” (akin to “Saturday Night Live), which has cast members imitate leading Belgian officials and celebrities, had a character who played Ambassador Howard Gutman.  During his posting, Ambassador Gutman created a goal to visit all 589 of Belgium’ cities and communes, in order to rebuild the U.S.-Belgian partnership not just with the government, political leaders and business officials, but with all of the citizens.  His tour of all the municipalities was finally completed on May 5, 2013 when he visited the last stop on his list, Voeren.  The event was celebrated by a reception featuring Prime Minister DiRupo, Ambassador Gutman, and many mayors from all around Belgium.  The Wall Street Journal ran a front page article entitled “Every Day is Someplace in Belgium for an Ambassador Keen To See It All “ applauding Ambassador Howard Gutman’s partnership tour.

United States Senators Leahy, Grassley,  Shelby and Cochran attended the Memorial Day Ceremonies in Belgium in 2011 and, on June 7, they placed a copy of Ambassador Howard Gutman’s speech into The Congressional Record.  After learning about one of Ambassador Gutman’s speeches on the future of the climate debate, Prince Charles of the United Kingdom, who heads the P-8’s efforts on climate, put together a 1 on 1 meeting with the Ambassador in Brussels.  The current Representative of Saudi Arabia to the United Nations, the former Mayor of Jeddah, wrote a column, entitled “Iftar with a Friend”  in the Jeddah newspaper calling for greater tolerance for the West after attending the Embassy’s Iftar dinner.  Upon completing his service, Ambassador Gutman was presented the first annual “European Union Jewish Building Friendship Award” for his work on behalf of the Jewish community in Belgium.

According to the Gallup International Poll, in 2012, Belgium had the greatest increase in the world in its favorability rating towards U.S. leadership, leading Foreign Policy’s website to ask “Anyone have any guesses how America got out of the Belgian doghouse?”  Secretary Clinton praised Ambassador Howard Gutman during her last visit to Brussels for helping to increase America’s favorability rating by 600%.  On his visit to Brussels, Secretary Kerry echoed such praise for the successes that had been reached in the four year tenure.

The 2009-2013 period saw important advances in the Belgian-American partnership.  Belgium became an valuable member of NATO, providing “surge” troops in Afghanistan when asked to do so by President Obama; committed to stay in Afghanistan until the U.S. troops complete their exit; and pledged post- exit aid to the Afghani reconstruction.  Belgium was one of seven NATO countries to engage in the air mission in Libya.  Belgium helped guide the sanctions regime against Iran by declaring the closing of its Port of Antwerp. And Belgium took part in many joint efforts design to remove the threat of terror.

At the Embassy, Ambassador Howard Gutman oversaw a staff of more than 400 State Department officers and local Belgian employees.  The Embassy made certain that the United States continued to be well-represented during the Wikileaks and NSA controversies, the threatened closing of the Embassy during government budget battles, and the security concerns following the attack in Benghazi.